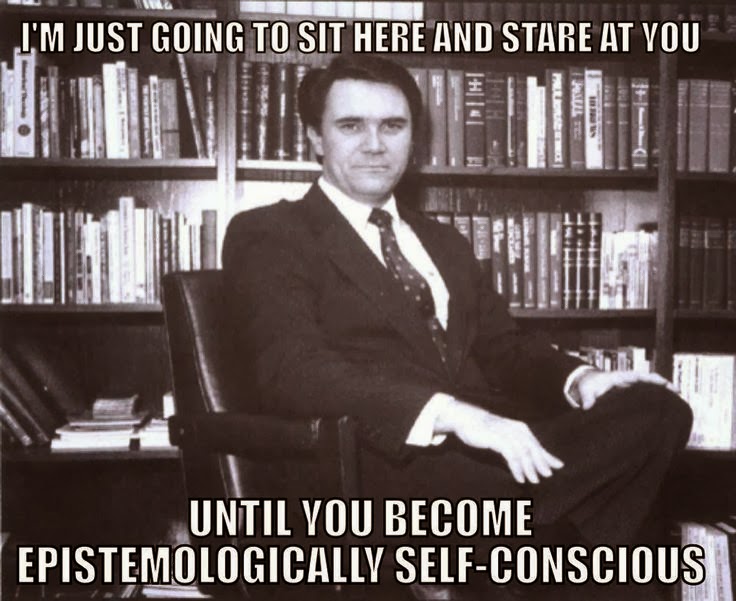 In the last few weeks I've read quite a bit of Dr Bahnsen's writings and also I watched his video series on apologetics, as well as his famous debate with the atheist Dr Gorden Stein. If you haven't watched any of these videos I encourage you to watch them.

Some of the stories that Dr Bahnsen tells have been very helpful for me and I wanted to share some of them here.

Dr Bahnsen has a PhD in philosophy and he did his doctorate on self-deception. He says that this is a very real phenomenon. See Romans chapter 1 which talks about how all people, including unbelievers, actually know God. The difference between believers and unbelievers is that believers profess God and unbelievers suppress God.

One of the stories Dr Bahnsen tells is of a woman (lets call her Ms Deceived or Ms D for short) who believes that her son is a little angel. (Let's call the boy Bart which is an anagram for Brat). However, everyone else knows that this isn't true - and that Bart is a little brat. He continually starts fights at school and is always causing trouble. Bart's teacher repeatedly tries to talk to Ms D about Barts delinquency but Ms D won't believe it. 'It's a conspiracy against my little angel' she protests. Everyone is lying and making it all up according to Ms D. Eventually things get so bad that Bart gets expelled when he starts yet another fight and seriously injures another student. Ms D is furious and believes that the injuries were the result of self defense or never actually happened and that Bart is totally innocent. She moves to another town and takes Bart to a new school. A month or so down the track and the same things happen at the new school. She is convinced that the old school must have contacted the new school and spread malicious lies about Bart. In her heart of hearts she knows that Bart is a brat but she convinces herself that Bart is a little angel and that the evidence for his brattiness is lacking. She is sure that the best line of action is to do everything she can to protect her 'little darling' and argue forcefully against anyone who would dare to suggest that she could possibly be wrong in her assessment of the real situation.

I think that the above story speaks for itself about what Romans 1 is telling us.

Another story Dr Bahnsen tells is of a man who wants to start a business but doesn't have enough money to do so. So he talks to a friend of his who is generous enough to provide him with the capital he needs to get the business up and running. A year later and the business is booming. The man says to his friend - look at my business - the business that I started all by myself. I'm a self made man. I'm almost a millionaire thanks to the business I started and that I alone financed. His friend is shocked and tries to point out that the business wouldn't have gotten off the ground to begin with if it hadn't been for his capital injection of finances. The businessman denies all knowledge of his friends help and argues that the friend is just trying to get money out of him now that he's almost a self-made millionaire.

This is the situation of the unbeliever. Without God the unbeliever would not be able to reason in the first place, but has to continually borrow (unwittingly stealing) from the biblical worldview in order to do any reasoning at all. Without God things like reasoning, knowledge, truth, logic, morality would not exist, and it is only due to God's kindness that people have free will to suppress the knowledge of God and continue to live on 'borrowed capital'.

Another useful bit of information I learned from Dr Bahnsen is in relation to the well known atheist Bertrand Russell. According to Dr Bahnsen, Russell was continually flip flopping on his beliefs because he didn't have a solid epistemological method (way of knowing things). It was if he was saying we don't know anything for sure, but we do know that Christianity isn't true! This is the case with atheists and unbelievers in general. They have no way of knowing anything for sure, but yet they seem sure that God doesn't exist or that the Bible is not true.

I encourage you to listen to one of the greatest debates ever - Does God exist? Dr Greg Bahnsen vs Dr Gorden Stein https://www.youtube.com/watch?v=anGAazNCfdY.