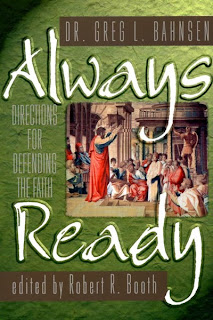 I just finished reading 'Always Ready' by Greg Bahnsen and I'd like to highly recommend it as one of the best apologetics books I've ever read. It's a great exposition of presuppositional apologetics.

The thing I appeciated the most from the book was the last chapter which ties the presuppositional method together and shows how Paul used it in Athens in Acts chapter 17.

There is so much in Acts 17 that is cultural background. For example the fact that when the Areopagas accused Paul of advocating foreign gods, this echoed the charge that was brought to Socrates in Athens in 399BC where he was put to death for advocating foreign gods and preaching against the Athenian gods. (At this point I did a bit of my own extra research into Socrates - which was fascinating - it was interesting to learn how Socrates himself used a kind of presuppositional argument by asking questions that led his opponents to refute themselves. This of course did not make him popular with people who thought they were wise.)

It was also interesting to learn that there was actually a temple to the 'UNKNOWN GOD' on Mars Hill where Paul was preaching. And behind him was the Parthenon - a temple made by human hands. Paul did not attempt to gain favour with his audience but presented the gospel as being antithetical to their beliefs. They could not just add Jesus onto their existing foundation but had to abandon their false philosophical basis in order to know the true Creator God.

Note - if you haven't yet read 'Ultimate Proof' by Jason Lisle then I'd recommend reading that one first before reading 'Always Ready'. Ultimate Proof is easier to understand, but Always Ready goes deeper and is a bit more technical.

16 While Paul was waiting in Athens for Silas and Timothy, he was greatly upset when he noticed how full of idols the city was. 17 So he held discussions in the synagogue with the Jews and with the Gentiles who worshiped God, and also in the public square every day with the people who happened to come by. 18 Certain Epicurean and Stoic teachers also debated with him. Some of them asked, “What is this ignorant show-off trying to say?”
Others answered, “He seems to be talking about foreign gods.” They said this because Paul was preaching about Jesus and the resurrection.[a] 19 So they took Paul, brought him before the city council, the Areopagus, and said, “We would like to know what this new teaching is that you are talking about. 20 Some of the things we hear you say sound strange to us, and we would like to know what they mean.” (21 For all the citizens of Athens and the foreigners who lived there liked to spend all their time telling and hearing the latest new thing.)
22 Paul stood up in front of the city council and said, “I see that in every way you Athenians are very religious. 23 For as I walked through your city and looked at the places where you worship, I found an altar on which is written, ‘To an Unknown God.’ That which you worship, then, even though you do not know it, is what I now proclaim to you. 24 God, who made the world and everything in it, is Lord of heaven and earth and does not live in temples made by human hands. 25 Nor does he need anything that we can supply by working for him, since it is he himself who gives life and breath and everything else to everyone. 26 From one human being he created all races of people and made them live throughout the whole earth. He himself fixed beforehand the exact times and the limits of the places where they would live. 27 He did this so that they would look for him, and perhaps find him as they felt around for him. Yet God is actually not far from any one of us; 28 as someone has said,
‘In him we live and move and exist.’
It is as some of your poets have said,
‘We too are his children.’
29 Since we are God's children, we should not suppose that his nature is anything like an image of gold or silver or stone, shaped by human art and skill. 30 God has overlooked the times when people did not know him, but now he commands all of them everywhere to turn away from their evil ways. 31 For he has fixed a day in which he will judge the whole world with justice by means of a man he has chosen. He has given proof of this to everyone by raising that man from death!”
32 When they heard Paul speak about a raising from death, some of them made fun of him, but others said, “We want to hear you speak about this again.” 33 And so Paul left the meeting. 34 Some men joined him and believed, among whom was Dionysius, a member of the council; there was also a woman named Damaris, and some other people.