Response to Atheist Lee video "God will answer your faith."


I found this video today by "Atheist Lee" and decided to write a blog post letter response. To the Christians reading this post - people like Lee are one of the big reasons why Apologetics is so important, and why it needs to be done well and in a biblical way. 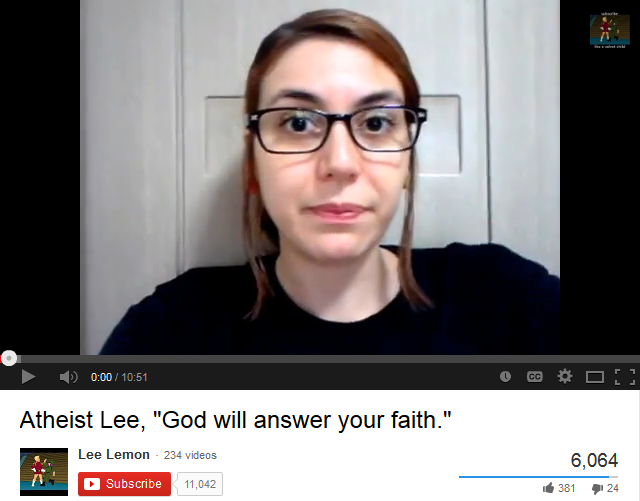 Thank you for having the openness and courage to honestly talk about your loss of faith in this video. You claim that you were once a Christian, and that you gradually lost your faith after starting to actually read the Bible. It is possible that you were indeed a Christian in the past, however I question whether or not you had ever really truly repented. Given the fact that you'd never actually read the whole Bible it raises questions about the depth of any faith that you had. The Bible says,


1 John 2:19 “They went out from us, but they did not really belong to us. For if they had belonged to us, they would have remained with us; but their going showed that none of them belonged to us.”

Proverbs 3:5-7 “Trust in the Lord with all your heart and lean not on your own understanding; in all your ways submit to him, and he will make your paths straight. Do not be wise in your own eyes; fear the Lord and shun evil.”

You say that when you read the Bible you had trouble with some of the moral issues in the Bible such as with the story of Job. I assume you mean you think it was immoral for God to let Job suffer so much? This story has been an incredible blessing to millions of people around the world, because it helps us to realise that God is sovereign and that our suffering does have a purpose and a reason. At the end of all of Job's questions God revealed himself in power, and Job put his hand over his mouth and acknowledged that he had spoken of things he knew nothing about.

Then the LORD answered Job out of the whirlwind and said, "Who is this that darkens counsel By words without knowledge?

The Lord said to Job:
“Will the one who contends with the Almighty correct him?
Let him who accuses God answer him!”
Then Job answered the Lord:
“I am unworthy—how can I reply to you?
I put my hand over my mouth.
I spoke once, but I have no answer—
twice, but I will say no more.”
Then the Lord spoke to Job out of the storm:
“Brace yourself like a man;
I will question you,
and you shall answer me.
“Would you discredit my justice?
Would you condemn me to justify yourself?
In questioning the morality of God and becoming an atheist you've abandoned the only source of objective morality. How do you account for absolute morality without God? Without God as a foundation for morality all you are left with is your own mere opinion based on what you personally happen to not like.
The next issue you raised is related to apologetics. You said that you read a lot of books on apologetics but that the arguments were weak and didn't hold water. I agree with you that sadly much that has been written on apologetics is weak, because it departs from the authority of the Bible and argues for the probability of God based on evidence.
In your research of apologetics, did you encounter Presuppositional Apologetics and the Transcendental Argument for God? Did you watch any of Sye Ten Bruggencate's videos and go through his website www.proofthatgodexists.org ? Did you watch the famous debate between Bahnsen and Stein?
Another issue raised in the video was that you didn't see any evidence for God. There is so much evidence for God's existence that you are without excuse. Even the concept of evidence is proof that God exists because evidence presupposes knowledge and truth, and you can't get either of those without God. (See my website www.godorabsurdity.com )
Faith is a further issue that you brought up. It's sad that many Christians misunderstand faith, and think that people just have to believe in God by blind faith, and that we can't prove that God exists in a rational way. Those who think this have a wrong understanding of faith. Biblical faith in God is confident trust based on reason - in fact faith is the foundation for all reasoning and rationality. I've written more about that in my blog post Faith - Is Christianity based on blind faith?.
Lee, I pray that you'd stop running from the God you know exists, but for some reason have chosen to rebel against. If you'd like to contact me I'd be happy to discuss these issues with you. (The best way to contact me is via the Contact form on my 'God or Absurdity' website.)
Kind regards,
Brendan

Update - After posting this video, Atheist Lee, responded. I've posted her response and my reply on another post here.
Posted by Unknown at 7:47 PM