What About Other Gods? (By Sye Ten Bruggencate - Copyright - Used by Permission) 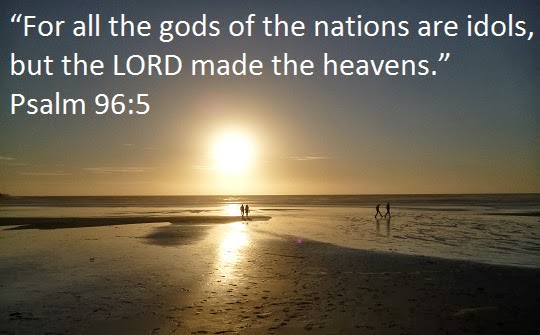 Unbeliever: Why can't some other "god" be the necessary starting point?
Christian: Because there are no other gods.
U: How do you know that?
C: Because God tells us: "For all the gods of the nations are idols, but the Lord made the Heavens" Psalm 96:5
U: What about the gods of the other religions?
C: They don't exist.
U: But other people believe that other gods exist.
C: I would argue that they don't, as Scripture teaches us that they are "suppressing the truth in unrighteousness."
U: Could you demonstrate why Allah or Vishnu couldn't be the necessary starting point?
C: Sure, because God tells us they don't exist.
U: But their "holy" books would argue that your God doesn't exist, how would you deal with them?
Christian: Which one do you believe?
U: None of them.
C: Then there is no sense arguing about them. We could also sit here and argue whether or not the moon is made of green cheese, but since neither of us believe that it would be a waste of time.
U: Surely you have heard of positing hypotheticals to disprove a claim?
C: Yes, that would make sense in other instances but we are talking about the necessary starting point to make sense of argumentation, so it would not make sense to argue from a position that you don't believe.
U: Ah, you are just saying that because you can't refute my hypothetical that Allah is the necessary starting point.
C: Not at all. Just for kicks, I will refute your hypothetical
Premise 1: If atheism is true, no gods exist
Premise 2: Atheism is true.
Conclusion: Therefore no gods exist and you have been refuted.
U: Um, but you are not an atheist!
C: Um, but you are not a Muslim! Do you see why refuting hypotheticals when it comes to the justification for knowledge is pointless?
U: Okay fine, I have just become a Muslim, now refute my god.
C: Do you see what you must do to even begin arguing against my position, you must abandon your position.
U: What do you mean?
C: Are you saying that Atheism cannot provide the necessary foundation for knowledge?
U: Um, atheism can't provide a foundation for anything as it makes no claims it is just a lack of belief.
C: Well in atheism there is the implied claim that knowledge can be justified without God, and you have demonstrated that by abandoning atheism to make your argument.
U: Okay fine, but you will discard my deity as quickly as I discard yours.
C: Not at all. I know that you are not a Muslim, but I will demonstrate how I refute their claim as a sign of good faith. (There are only 2 worldviews, God and "notGod." I treat all the "notGod" worldviews the same way, I ask them how they know what they know). How do you know what you know?
U: Revelation from Allah in the Holy Qur'an.
C: What does the Qur'an say about the Bible?
U: It denies the Bible.
C: Then you need to read your Qur'an. The Qur'an actually says that the Bible is a previous revelation of Allah, and that it is true (Surah 6:114*) so why don't you believe what it says?
U: The Bible has been corrupted over the years.
C: Well actually we have complete copies of the Bible which predate the Qur'an (i.e. Codex Vaticanus - 4th century AD), but what does your Qur'an say about whether or not the words of Allah can be changed?
U: Um, you got me again.
C: Well the Qur'an actually says that the words of Allah cannot be changed (Surah 6:34, 6:115**), so how do you reconcile the fact that the Qur'an teaches that the Bible is the words of Allah, and that the words of Allah cannot be changed with your claim that the Bible has been changed? (The point is that if the Qur'an is true, the Bible is true, and BECAUSE the Bible is true, the Qur'an is false).
U: Okay, good point, you have deconverted me from Islam, I have just become a Pastafarian and now believe that the Flying Spaghetti Monster is my god.
C: Just to be clear, are you telling me that atheism cannot justify knowledge and that is why you are jumping from alleged deity to alleged deity.
U: Yup, I'm a Pastafarian, refute my god.
C: What do you know about this god of yours and how do you know it?
U: He revealed it to me while I was standing in my closet by reaching down with his noodly appendage and implanting this knowledge into my head.
C: Well if I wanted to debate personal arbitrary revelations, I would go to the local asylum, as that is not at all like my claim. I offer an objective revelation for anyone to examine, but if you wish to claim that as your justification for knowledge, I would ask you to please speak into the microphone and tell the world what it takes to deny the God of Scripture.

For more about self-refuting worldviews (which includes some information on Islam) see the article I wrote here http://www.101arguments.com/2013/01/the-argument-from-self-refuting.html.

*Surah 6:114 "...Those unto whom We gave the Scripture [the Taurat (Torah) and the Injeel (Gospel)] know that it is revealed from your Lord in truth..."
**Surah 6:34 "And none can alter the words of Allah"
Surah 6:115 "And the Word of your Lord has been fulfilled in truth and in justice. None can change His Words. And He is the All-Hearer, the All-Knower."

See also Deuteronomy 13:1-5 and 18.20 which basically make it clear that if someone comes saying they have a revelation from God that the way to test the truth of this is whether or not it agrees with what has already been revealed - if it contradicts the revealed Word of God in the Bible then that revelation is not from God.

See also my other blog post on Islam here http://brendantruthseeker.blogspot.co.nz/2014/02/more-than-dreams-islam.html.
Posted by Unknown at 7:56 PM

Email ThisBlogThis!Share to TwitterShare to FacebookShare to Pinterest
Labels: Allah, Islam, other gods, Sye, W, what